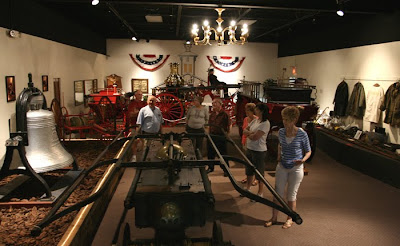 This hand-powered pumper sits in front of the bell (above) from Mansfield's original fire station.  When a new station was built in 1925 the bell was displayed in Central Park until it was moved to the museum in 1993.  Lady friend Sue Brooks and square dancing friends Mark and Nancy Meinzer, Don and Roberta Karger, Rich and Rosa Hatfield and Linda Warren are pictured variously as retired firefighter and museum volunteer Ray Secrist leads a tour (below) through the Mansfield Fire Museum. 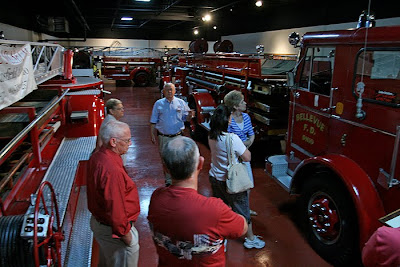 One of Mansfield’s treasures is lurking behind the “Fire Museum” sign on West Fourth St.
If you haven’t been there and are the least bit interested in Mansfield history in general and its fire history in particular, do yourself a favor and enjoy a visit.


It is located in the old Five Cousins store building just East of Brookwood Way on the South side of West Fourth St.
And it is stunningly well done—every bit the volunteer work of Mansfield and area firemen, their families and friends.

You will see old stuff; really old stuff. Can you imagine a wooden, city water line that firemen used to drill a hole through and attach their hoses; being mindful to plug the hole when their work was finished?

Hence the origin of the term “Fireplug,” your tour guide is likely to quip. He will be telling you the truth.

One of the niftiest pieces of apparatus is a 1900 American Metro steam-operated predecessor of today’s fire engines. It was horse-drawn and used steam power to operate its pump. Its fire service life was lived as truck #47 with the St. Louis, MO fire department. 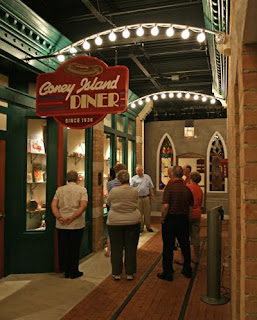 Nearby in their marvelous display is an even older “pumper.” This one was propelled to fire scenes either by men or horses—whatever was available. A bucket brigade often was used to fill its tank and ranks of men on sides of the machine would rapidly raise and lower long arms, alternating to power its pump.
You will walk through a replica of an old downtown street scene and yet, recognize a store or two. Younger folks might not recognize the parallel bands of steel in the street. Older folks might joke about them being the tracks laid by passing street cars.

You will learn from a large display the “Biggest Fire of the (past) Century" was when the Quality Furniture Co., burned on February 12, 1944.

You will see a replica of a fire station, horse stable and learn how harnesses would drop from the ceiling to hurry the horses on their way.

When you pull in you may notice a vigilant Dalmatian pooch sitting on a front ledge of the building; dogs long identified with the fire service.
Not only are they extremely friendly and loyal they were a big help to the firemen by protecting their horses from thieves of that period when the horses were tethered out of harm’s way at a fire scene.
Your volunteer tour guide likely will tell you that story and a few more.

One of the biggest testaments to the terrific quality of the museum is noted in the several, priceless, antique engines on loan there.

One potential, out-of-state donor said “I knew this was the perfect place for my donation when I walked in the front door.”

It’s certainly a perfect, local place to enjoy an hour or so on a weekend afternoon; mid-May to mid-October, 1 to 4 p.m. 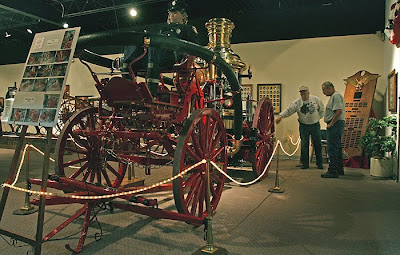 1900 Steam-powered pumper, truck #47 from the St. Louis, MO fire deparetment is pictured above with retired firemen Paul Johnson and Marvin Galloway while Secrist (below) shares stories in the replica horse-stable from a long-ago fire station. 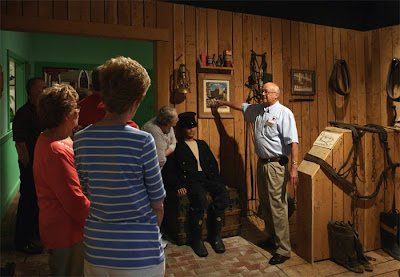